The Inside Guide To Franchising Your Business

Below are a number of testimonials from clients who can ‘vouch’ for our incredible value for money, the work we do and the robustness of our Franchise Legal Agreement.

As part of your due diligence we will also give you the opportunity to speak to several clients who have used our services.

“I franchised my business with Mark and it was the best business decision I made. In only one year I moved from being a sole trader to a franchisor with eight franchisees (now got over 40). I am very proud of what we have achieved and it wouldn’t have been possible without Mark. Initially I was looking for someone to help draw up the legal contracts at a reasonable price. Mark provided that for sure, but so much more! What I didn’t expect was just how hands on he would be.

Mark offered a LOT of support and advice; practical ideas on how to run certain aspects of the franchise, legal advice when signing up new franchisees and he even let me bend his ear when I was getting frustrated and needed a pep talk! I highly recommend his excellent professional and value-for-money service.”

“Mark worked with us to franchise the business. We have sold over thirty yellow page franchise areas and ten Licenses with further sales imminent. We have had 1500+ enquiries. Before we started working with them we had worked unsuccessfully with a different franchise consulting firm who were charging us considerable higher fees too. Their fees are very good value for money and we got a very quick return on our initial investment too.

Mark also did some general business development work within the business and helped us generate record quarter results. The Franchise Agreement also protected us from a third party claim which we were able to pass back onto the franchisee as stipulated in the Agreement”

“Mark has been a very good find, after having silly quotes of £6000 just to find out if my business was able to be franchised. Mark was on hand during the whole process and in our second month we had sold our first two franchises (now got over 40). I found the whole process quick and simple and nearly everything was completed by Mark & Julie. I would highly recommend Mark if you’re looking to franchise your business.”

“Mark has helped me achieve the National Coverage I was looking for through franchising. We are doing very well and the amount of money I have made in front and backend fees is brilliant. I would recommend Mark and the team to anyone. Their help and support in unbelievable. I also relied on the Franchise Agreement to terminate a franchisee and received a big settlement too.”

“I have now got 20 franchisees on board all doing well. The service and support from Mark has been first class and very professional. If you are thinking of franchising your business then these are the people you should use to help you. I was also able to rely on the Franchise Agreement to protect my business when a franchisee had to leave due to ill health.”

“We worked with Mark on creating a Franchise business from scratch and we were extremely happy with the support Mark provided. We received guidance at every step and a suite of valuable documents (including the Franchise Agreement and Side Letters) for the business and some great sales tools for hiring the right Franchisees. We’ve been running for over a year (signing up 25 Franchisees to date) now and Mark still provides excellent support as required with our Franchise queries and any issues.”

“After chatting to other franchisors he had worked with (all gave glowing reports!) I decided to use Mark to set my franchise business up. I have to say Mark is efficient, professional and experienced. I currently have five franchisees with a sixth expected soon. Communication has been first class throughout the process, I highly recommend Mark for anyone looking to franchise their business.”

“Mark and his team have taken our small business from local to National in the space of a few years and we have not looked back. The ongoing professionalism and expertise they have provided has been exceptional. They have been constantly on call to help and advise every step of the way and offer the kind of clear, no- nonsense approach to moving forward and problem solving which is hard to find. If you are looking to expand your operations, look no further - you've found your dream team.”

“Mark’s programme helped to keep me focused and I was ready to take on a pilot within 4 months. Shortly after this I signed my second pilot (I now have 26).
Since completing my franchise of the business Mark has remained true to his word. On the occasions I have needed some help he has provided effective advice and he has endeavoured to keep in touch with Genie Tutors progress.”

“Since working with Mark our revenue has more than doubled. They are currently helping us reengineer the business as well as franchising. We have even had to move to bigger premises to cope with the additional work. We had a problem with one of our franchisees and the Franchise Agreement fully protected us and enabled us to terminate his franchise.”

“I have sold eight franchises in the last 15 months and hoping to take this to twelve in the next four months. Mark has been a great help and is always available if I need any extra support or assistance. They have been superb throughout the whole journey and continue to be nothing but 100% behind our goals and objectives”

“Mark has helped me develop Kalma Baby into a License with the view to franchise in another twelve to eighteen months. I have already sold three Licenses in the first couple of months with further enquiries already coming in. I haven’t even started properly advertising it yet !! The service and support from Mark and Julie has been first class. Mark’s expertise has been impeccable. Support guidance and questions answered promptly !”

“In the short space of time I have worked with Mark I have sold 2 UK Franchises and a License into the USA. Enquiries for the franchise are flooding in and I am really excited for the future.”

“I have been very impressed with the Deliverables, Service and Support I have received from Mark and Julie whether it has been developing my initial Franchise Materials, handling enquiries for me, or dealing with franchisee issues when they occasionally arise. I am more than happy to recommend their services to anyone interested in franchising their business. I have four on board now and it is really building momentum now”

“I have only been working with Mark for three months and already have my first franchisee on board with another expected imminently. The deliverables, support and help from Mark and Julie has been excellent and I wouldn’t hesitate to recommend them to anyone”.

“I’ve worked with Mark in two separate companies. Both times we saw excellent improvements in the performances of the businesses.”

“Mark is one of the most committed people I have ever worked with. He was involved with several acquisitions and dozens of licensing deals which were worth millions of pounds to us”

“I have worked with Mark and Julie for the last couple of years and found their help and service extremely valuable, especially because I am always very busy and don’t have the time to do too much myself. They have done 95% of everything in the production of all the Deliverables I needed PLUS they handle all my enquiries for me too. I have relied on the Franchise Agreement on two occasions and need another four UK sales to give me full UK coverage.”

“Mark has helped me sell three franchises in the first 2 months of working with him which is generating both front end and backend revenue.

Prior to working with Mark we had been quoted some ridiculously high fees ranging from £20k to £100k and were about to put the franchise project on hold as there were too much risk and cost involved. The whole project was into profit after just two months.

I have had to rely on the Franchise Agreement to get rid of a problem franchisee. It enabled me to terminate the franchise and secure a settlement fee for the remainder of the contract”

“Our pilot franchise alone has generated me over £240k worth of business.”

“Mark worked with me for eight months to get my business franchised and up and running. In that time we sold five franchises which generated a substantial upfront income as well as an ongoing 20% turnover royalty from each franchise.”

“We headhunted Mark after a recommendation from a senior Marks & Spencer Director. Mark worked tirelessly with me on a number of projects including new product development, licensing, marketing, and the acquisition of our largest competitor.”

“Mark has helped me on the Licensing side to develop a Global Brand. We’ve already sold the United States and I’m now targeting Europe.”

“Mark has helped us double revenue by increasing prices and developing several key strategic alliances which are introducing dozens of new clients to us. We are also working with them on a couple of potentially massive joint ventures”.

“I found Mark's help to be invaluable and his advice to be very clear when he helped me with licensing my new business. He has been very supportive and encouraging and was happy to help with any question or concern I had. I wouldn't hesitate to recommend him.”

To arrange a FREE Franchise Consultant Evaluation CALL US on

The Inside Guide To Franchising Your Business 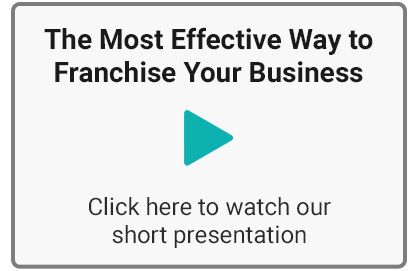 Why Choose Our Franchise Consultants?

How Long Does It Take to Franchise Your Business?

What Are The Costs To Franchise Your Business?

Is Your Business Ready To Be Franchised?